At some point in your carreer in data science, you’ll deal with some big dataset which will bring chaos to your otherwise clean workflow: pandas will crash with a MemoryError, all of the models in sklearn will seem useless as they need all of the data in RAM, as well as the coolest new methods you started to use, like UMAP (what did you expect? That the author would create a cutting edge ML algorithm and a distributed, out-of-memory implementation?).

Your deadline is approaching, you haven’t scratched the surface on distributed computing, and start to imagine if there’s a quicker and may I say, dirtier approach.

And there is! And it is actually not dirty at all! In this post, I’ll show some hacks to make your favorite model work in a single-node environment and a cool tool (Dask) that will let you grasp distributed computation in your cozy python environment and with your well known pandas syntax.

I hope that the tricks I’ll show will expand the array of problems you can solve with a single machine, help you understand a little bit more of distributed computing, and buy you time to study all the other tools!

We will build several ML pipelines and track their memory usage to see our tricks at work. In order to do this, I created a decorator that uses the tracemalloc and concurrent packages to sample memory usage in a function every 1 ms and return its results, drawing inspiration from this post. You can check the full code here.

For this example, we’ll use the fraud detection dataset from Synthetic Financial Datasets For Fraud Detection on Kaggle, with some feature engineering tricks borrowed from the Kaggle Kernel Predicting Fraud in Financial Payment Services. The data is not huge and it actually fits in memory, but it’s big enough so we can demonstrate memory usage gains with our tricks.

Let us solve the fraud problem in a naive way and track memory usage. The first thing we usually do is to read the dataset with pandas. How much does this cost, memory-wise?

Memory slowly increases up until over 570 MB, then spikes to 1.14 GB and then drops to 570 MB again, which is the final size of the df_train object. The peak usage being double the final object size may suggest there is an inefficient copy somewhere in the pd.read_csv function, but I’ll let this pass for now.

What should we do next? Train our model! Let us suppose that we’ve already done feature engineering, thus we only need to split our train_data into our design matrix X_train and target y_train and feed them to an ExtraTreesClassifier. Let us check how this step performs:

We jump to a peak of 1.91 GB, and get a steady usage of around 1.5GB. There are little “spikes” throughout the fit, which I suspect are the fitting processes of the individual trees (10 trees = 10 spikes). We end the process with 593 MB.

The final step in our pipeline is reading our test data, performing inference with our model, and reporting the test AUC:

We go from the previous step usage of around 600MB to a peak of 1.1GB and stop at around 600MB again. Also, our model’s AUC is looking great, at 0.9915. Putting it all together, our pipeline memory usage goes like this:

This is actually not much, but who knows, tomorrow we may be dealing with datasets and memory usages in the tens or hundreds of GBs. So, let us imagine that we’re limited to less memory than we used in the naive case, for the sake of this post. The same tricks that we’ll devise in this case should work for much larger datasets.

0. Use Dask instead of pandas

A simple trick to constrain memory usage is replacing pandas for dask, since it is almost trivial (dask API is a subset of pandas, so it should work as drop-in replacement). Dask can do a lot more than I’ll show here, scaling computation to thousands of machines in a cluster. For our purposes, however, we’ll use it to constrain RAM usage, as it can distribute computation and use the disk for storing intermediate results.

That’s because dask did not actually read the entire dataset. When we call dd.read_csv we perform two things:

For instance, when we check the object df_dd, it just gives us our dataframe’s structure:

As for the computational graph, we can visualize it by using the .visualize() method: 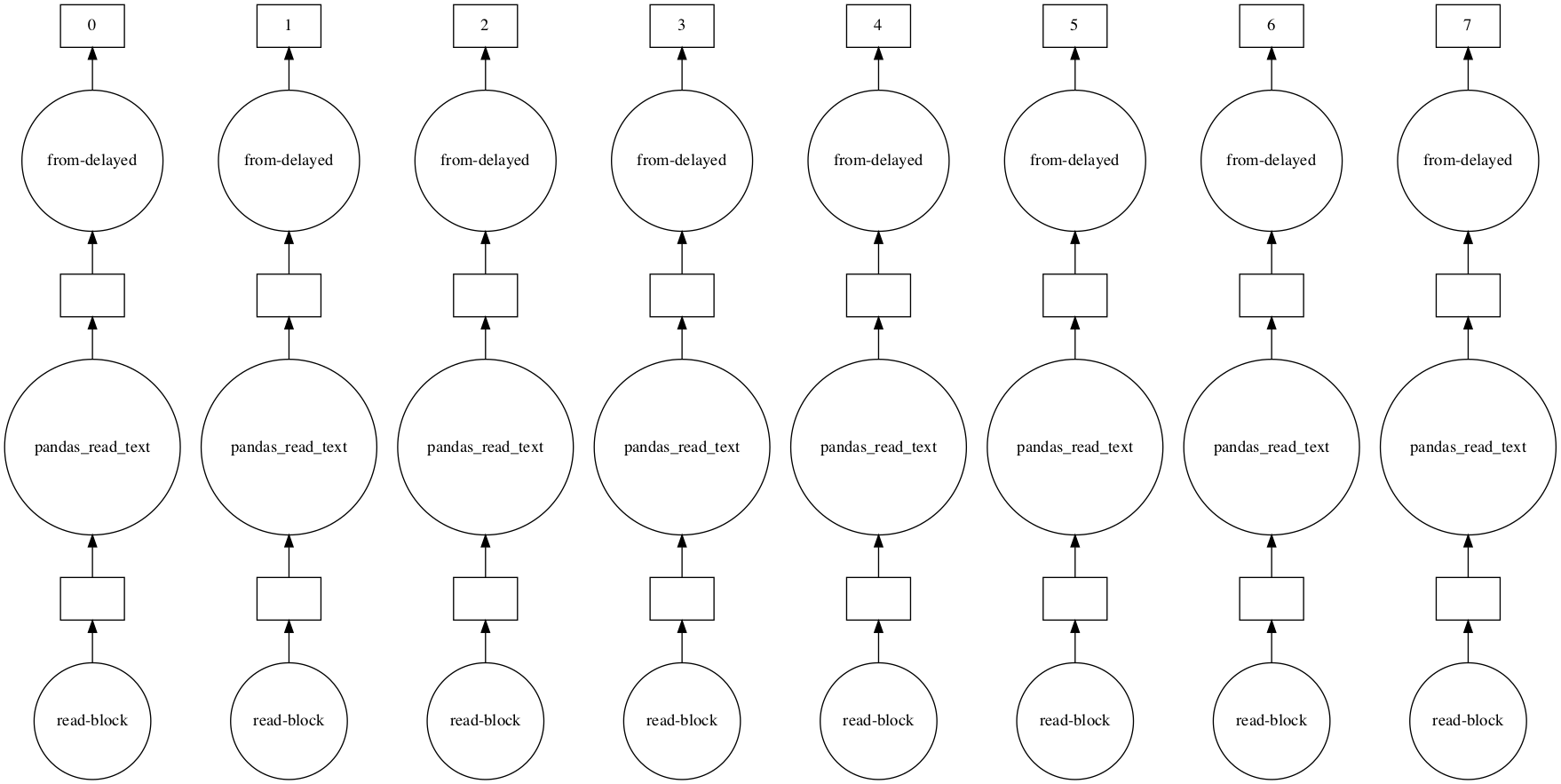 This graph tells us that dask will independently process eight partitions of our dataframe when we actually do perform computations. This is how distributed computation works: you break your work into smaller, independent pieces and run them in parallel.

But how do we compute stuff using dask? We use the .compute() method. Let us try it for checking how unbalanced our target variable isFraud is, by getting the prevalence of 1’s in it.

For a fair comparison to pandas, we will track memory usage all the way from reading the data, and will set scheduler='synchronous' in the .compute() method, so we run single-threaded.

Let us start with pandas. We read the dataframe, calculate the fraction of frauds in the dataset, store it in the variable fraud_prevalence, and finally print the value:

As calculating fraud_prevalence is fairly simple, the memory usage is almost the same as reading the dataframe, apart from the fact that we don’t return it and thus get a very low memory footprint when we step out of the function.

Let us now use dask. The syntax is exactly the same, apart from the .compute(scheduler='synchronous') method, which instructs dask to not only build the graph, but actually perform computations.

We get this interesting plot. It takes a little bit more time but memory usage is much lower at around a 250 MB peak. Remember the computational graph, broke into eight partitions? As we used a single thread (scheduler='synchronous') dask performed the computation sequentially, and as we can see in the graph, there are eight “blocks” through time. If we don’t use the 'scheduler='synchronous' parameter, dask will distribute computation across cores and threads:

It uses even more memory than pandas (not a lot more, though), but it gets to the result much faster (approximately 1s vs. 4s).

Our simple operation yields a very cool computational graph, shown in the figure below. For clarity, I now use blocksize=100e6 which splits the dataset into 4 partitions. For each partition, dask calculates a sum-chunk and a size-chunk which are the sum of the isFraud variable for the partition and the number of rows of the partition, respectively. Then, dask aggregates the sum-chunks and the size-chunks together into sum-agg and size-agg. Finally, dask divides these values to get the prevalence. Even though we depend on scanning all the data to get our result, much of the work can be done in parallel, and dask cleverly makes use of the parallelism and abstracts the details away from us. 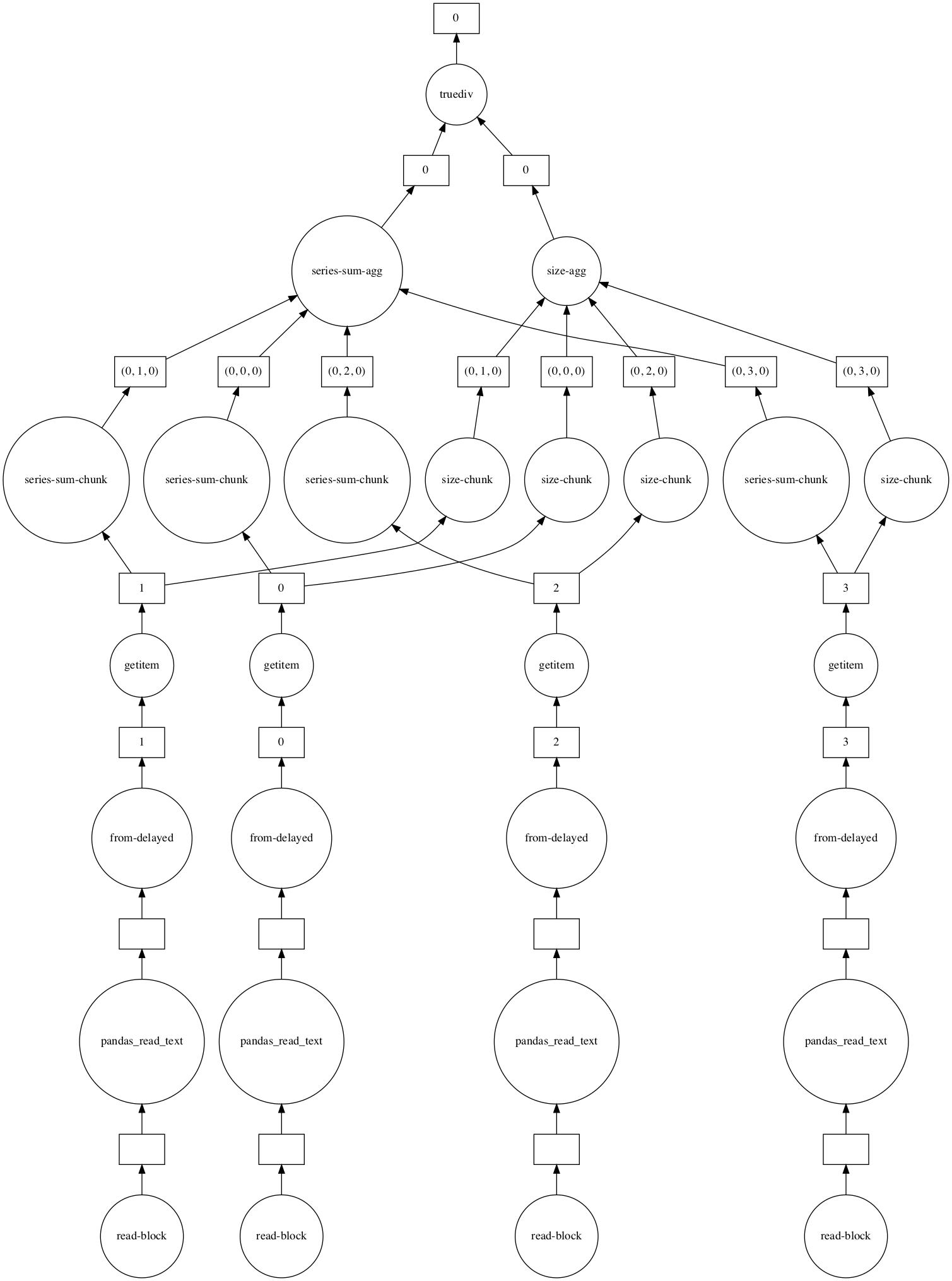 Going back to the sequential scheduler, if we want to further reduce peak memory usage, we can just reduce blocksize:

This further reduces peak memory consumption to 50MB, with the tradeoff that the operation takes 1 second longer as compared to pandas.

Cool! By using dask, we can (almost) still perform computations as we would do in pandas, but with a fairly reduced memory footprint. But our goal is not moving data around, but rather fitting models and solving our fraud analytics problem. Let us then use dask as a platform to improve our whole pipeline, along with some other tricks.

1. Train with a sample

Train with a sample? Yeah, I know…

When you’re a data scientist, it’s very hard not to use all the data: it is sitting there, waiting to be analyzed! But, using a sample of your data is actually a very simple and effective way to reduce memory overhead when training models. Remember that we’re using statistical learning: if the number of samples is large enough, adding more data to your model has diminishing returns. So let us test doing this simple trick first!

But we still have to scan the whole dataset to extract a sample of it! That’s why we have dask! Let us rewrite the pandas_read function to a dask_read_and_sample function that reads and samples the data with dask:

Cool. We’ve got a great memory reduction with a peak rate of 81 MB and final usage of 32 MB, as expected, as we took a 5% sample of our dataset. Let us check how the rest of the pipeline fares:

Let us improve our tricks!

Now our bottleneck is model inference. As the test dataset is 4x smaller than the train dataset, I did not bother to use dask instead of pandas in the scoring part of the pipeline. Let us change that, and make our model perform inference block by block:

The implementation is fairly easy. Just use dd.read_csv and set a block size, divide the data into X_test and y_test, and use X_test.map_partitions(model.predict_proba) and .compute(scheduler='synchronous') which will apply our trained model to each partition and get predictions sequentially. As AUC is hard to distribute, I made the choice to bring y_test to memory via the .persist() method and calculate the AUC in-memory as well, but this may be improved after some thought.

Much better!!! We’ve reduced peak memory usage by a factor of almost 10x in comparison to the naive model. But it was at the cost of model performance. Can we improve AUC without sacrificing memory usage?

3. Train with a sample, but on steroids: Bagging

What if training with a sample was the same as training with the full dataset? Instead of producing just a single model, we can run dask_read_and_sample and fit_model multiple times and combine the models produced in an ensemble. This is akin to Bagging, but with a reduced sample! It will take a lot more time, but it will allow us to stay low on memory and maybe improve our AUC.

We fit 10 models, each on a different 5% sample of the dataset, with replacement:

Our memory use is controlled, our result improved at 0.9932, even better than the full model at 0.9915. However, we are subject to the tradeoff of the pipeline taking longer to fit (but we could parallelize the ensemble construction).

Other way to get a good result with a low memory footprint is using Incremental Learning, which is feeding chunks of data to the model and partially fitting it, one chunk at a time.

Apart from several advances in incremental learning for all kinds of models (I urge you to check scikit-multiflow), there is a whole class of models that are incremental by design: neural nets!

So let us implement a Keras model that updates its weights partition by partition. There’s some complexities about normalizing features that I may have resolved poorly, but the core is creating a loop over partition ids, where we call df_train.get_partition(i), bringing one partition to memory, and then updating the model calling model.fit() inside the loop. This will effectively make the model do a full pass on the training data, but using much less memory.

Inference with a neural net seems a little bit more expensive in terms of memory:

We get an AUC of 0.9833, around 45s of runtime, and 360 MB of peak memory. It seems like a common ground between memory usage, performance, and execution time.

I shouldn’t leave you without a plot with a final comparison of our tricks: 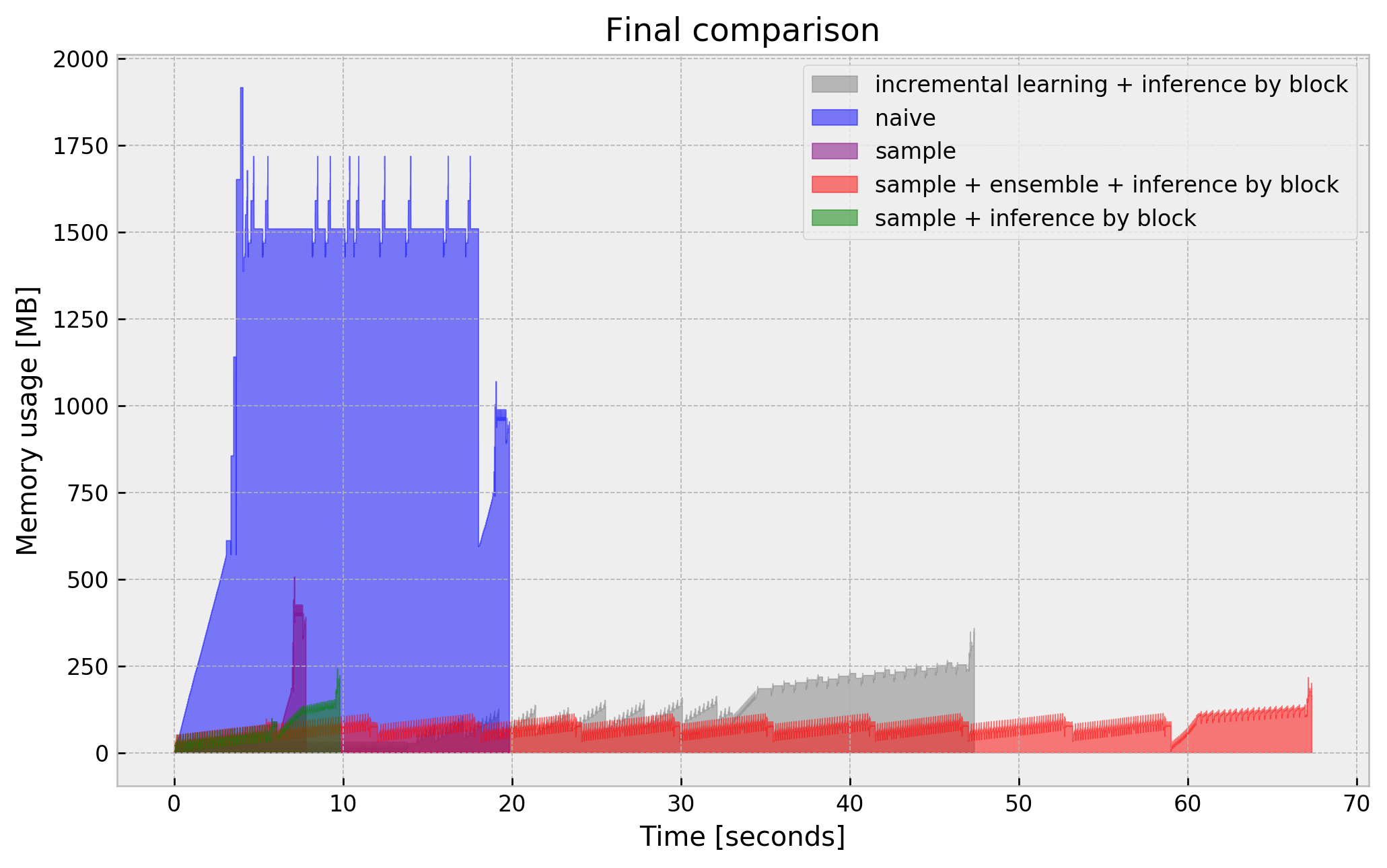 I’ll end the post here, but there’s a lot more tricks to try:

I hope this post helps you! Full code available here.

Previous The Bayesian Bootstrap
Next Solving the mystery of my d...