The features and shortcomings of Bayesian Networks (with CausalNex)

Bayesian Networks and structural causal models are really exciting. These methods invite us to think hard about our business problem and our assumptions. Causal graphs make it easy for everyone (not just data scientists) reason about and criticize the model. This level of explainability and rigor are in a stark contrast with the black box fit / predict logic that is very much present in the data science industry.

However, the widespread adoption of these models in industry still has yet to happen, at least from my personal standpoint. Given the growing interest of the community and new tools backed by big industry names (such as CausalNex by McKinsey / QuantumBlack), I thought it would be cool to try them out and check out features and shortcomings from an industry practitioner standpoint.

So, in this post, I’ll report my first try working with Bayesian Networks, more specifically using the CausalNex library. We’ll try to solve a synthetic causal inference problem from Nubank’s fklearn library (the same that I’ve already used in several other posts). Having a synthetic dataset gives us the benefit of knowing the true treatment effect and counterfactuals, providing objective evidence on the performance of the algorithm, even if it does not carry the weight of a thorough benchmark.

Throughout the post, I’ll try to point out the features and shortcomings of our Bayesian Networks / CausalNex approach. Without further ado, let’s dive in!

Nubank’s fklearn module provides a nice synthetic causal inference problem generator, so we’re going to use the same data generating process and example from its documentation.

A good counterfactual model will tell us how would be the recovery time for each individual for both potential decisions of taking or not taking medication. The model should be robust to confounders, variables that affect the probability of someone taking the medication. For instance, people with higher severity may be more likely to take the medicine. If not properly taken into account, this confounder may lead us to conclude that the medication may make recovery worse: people that took the medication may have recovered more slowly (effectively ignoring that their condition was also more severe in the first place). In the fklearn’s documentation, the data generating process is shown in detail, highlighting the confounders in the data. The effect we’re looking for is

We can divide our causal inference problem in two steps:

As we’re dealing with a simulated dataset, we have the luxury of knowing the true structure of the problem. It is very easy to define this through the CausalNex StructureModel API: 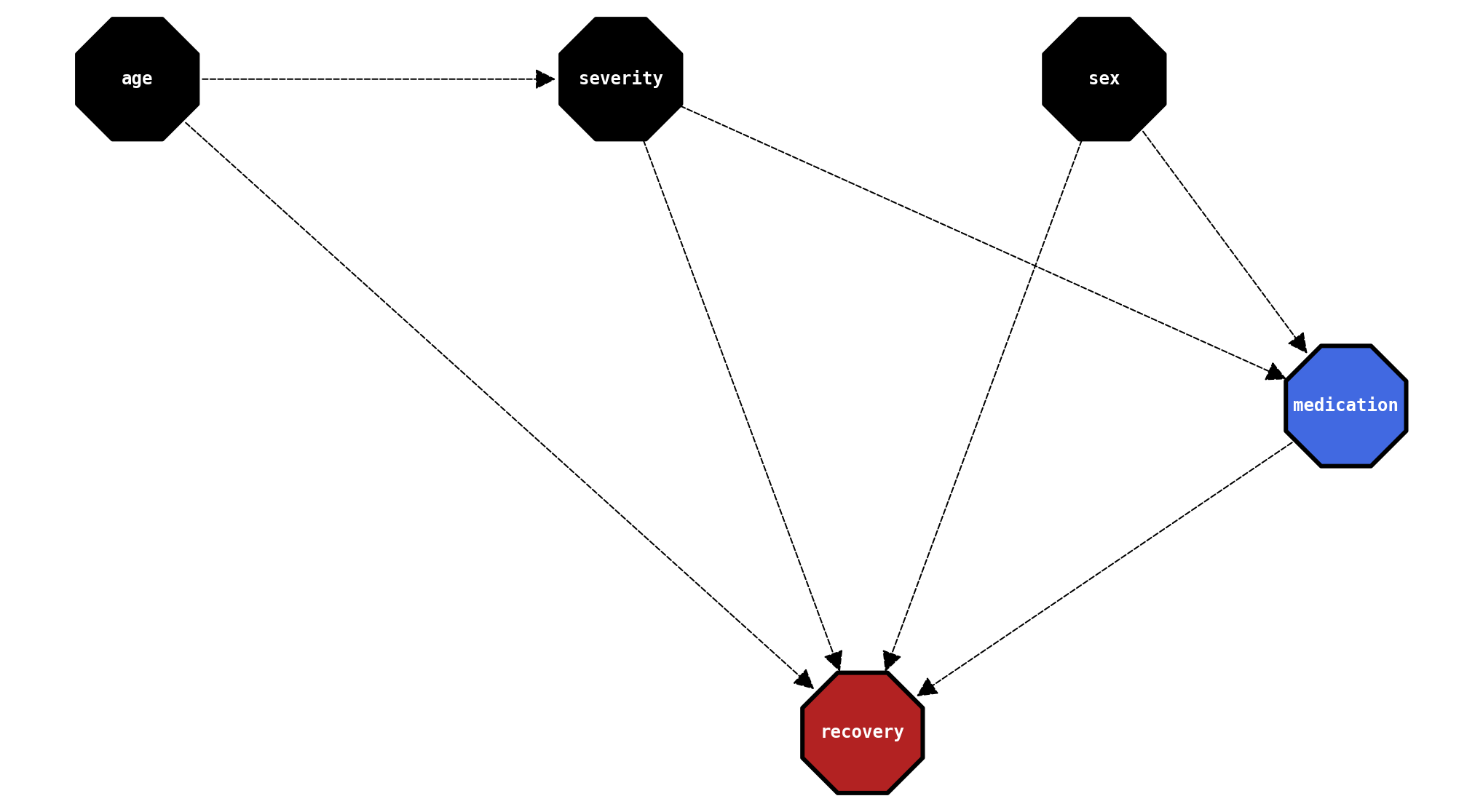 If you’re still confused about structural causal models now things may get clearer. The arrow sets the direction of causality, such that a -> b means that a causes b. So in our case recovery (our target, in red) is caused by all variables. The treatment variable, medication, is caused by sex and severity, and severity is caused by age.

Remeber that this is a simulated dataset. We know the true diagram because we created it and defined the data generating process (in detail here). In an industry application, we would never be sure of the diagram and would count on domain experts to try to make it reproduce reality as much as we can.

In any case, having the possibility of reasoning about the structure of the problem is clearly a feature to the practitioner!

Trying to learn structure from data

CausalNex provides the ability to infer the structure from data, through the NOTEARS algorithm. The algorithm receives our data and a threshold to remove weak edges. 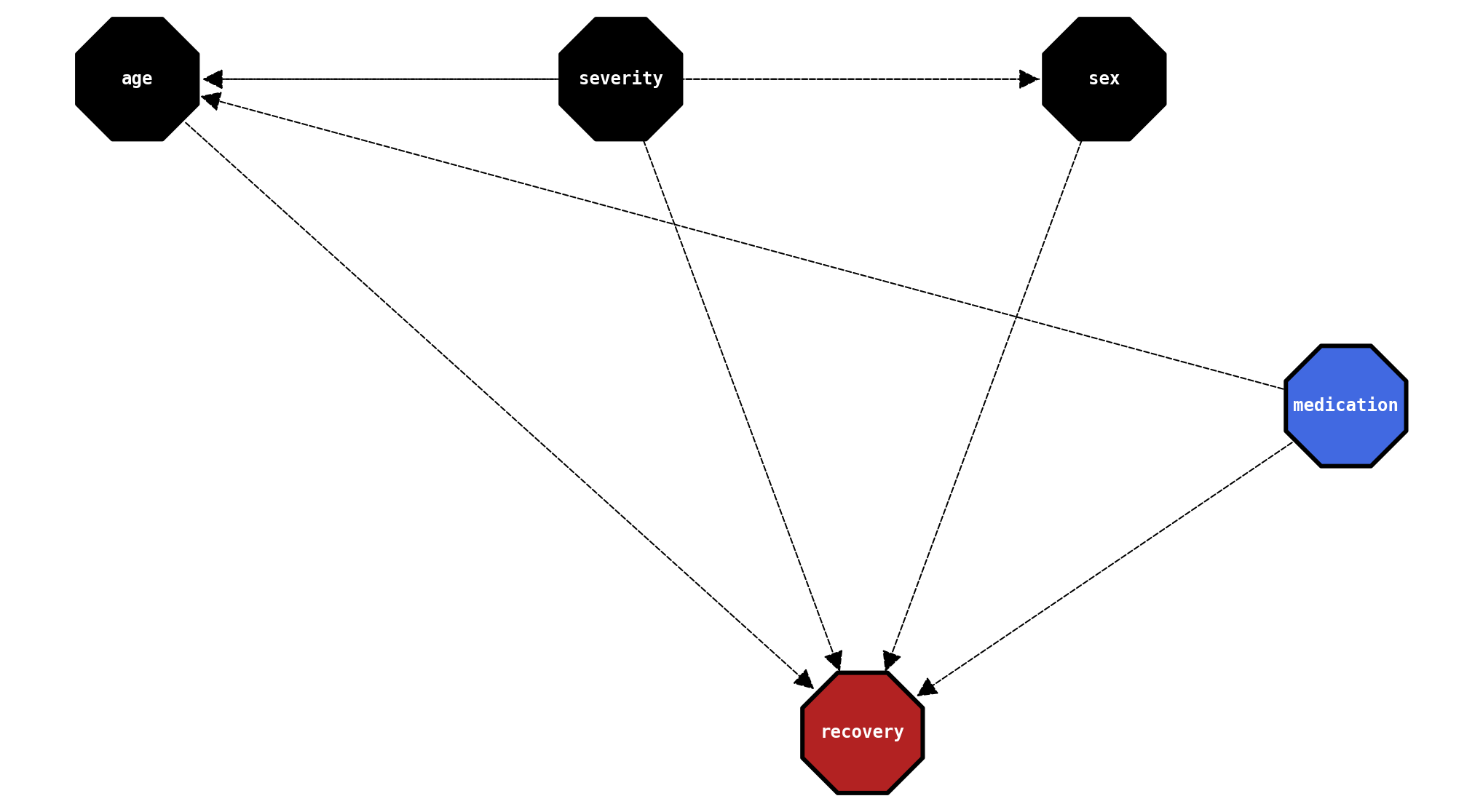 Not bad, as the algorithm found that recovery depends on all variables. However, other edges seem awkward, specially medication being a cause of age. Nevertheless, structure learning is recognized to be a very hard problem, and in most cases a domain expert will step in and make corrections to the relationships. It is a potentially very useful feature for exploring the data.

For the sake of fun and benchmarking, we’ll store this structure so we can test it down the road.

Another way to try to define structure is to use the design pattern of X (features), W (treatment) and y (target). An example is the Genearlized Random Forest method by Athey et. al. We assume the causal graph where X -> W -> y and X -> y. Each feature is assumed to be a potential cause of the target variable and the treatment variable as well. 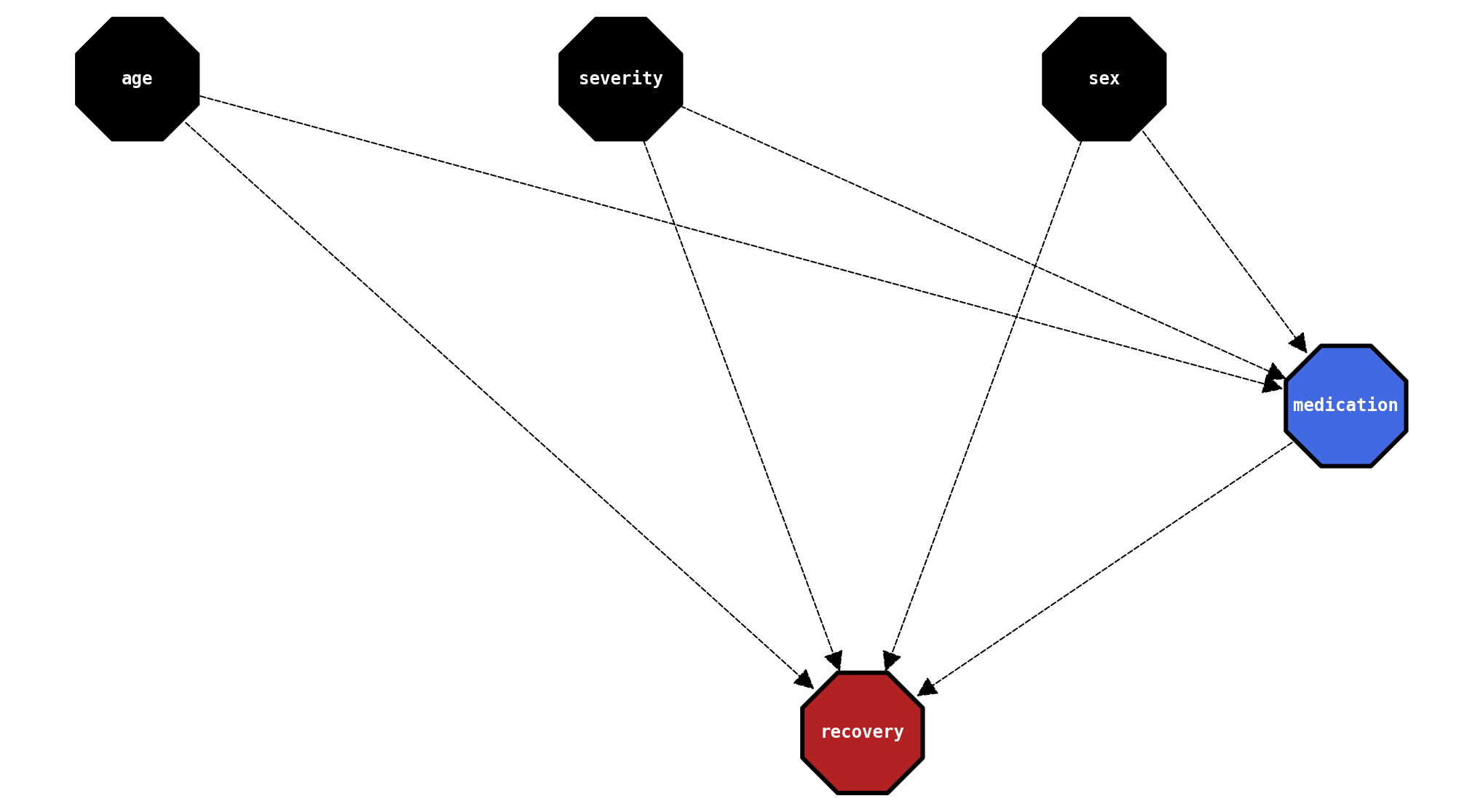 Cool. We’re off to a good start. We have three structures to test and perform inference on. Moving on to step (2)!

We divide Inference in three substeps:

We will walk through a single run with the true causal structure. Then, we’ll devise a procedure to test other structures and hyperparameters. Finally, we’ll analyze results.

Bayesian Networks in general require that we discretize variables prior to fitting them to data. This can either be a shortcoming or a feature: it may make results more interpretable by business stakeholders. However, it introduces an arbritrary choice that may be hard to reason about and has a high impact on results. Personally, I think the scale is tipped to this being a shortcoming, as I think the interpretability gains do not compensate the introduction of an arbitrary choice.

For simplicity, we perform quantile-based discretization, where all the features are discretized to n_bins bins. We also transform binary variables into strings, log1p-transform the target variable, and split data into train and test sets.

We perform special treatment on the target variable such as the the discretized labels represent the expected value of the bins, so we preserve expected values and can correctly compute treatment effects further on.

We start on the “easy mode” with df_rnd, where we do not have confounding.

Fitting and evaluating the Bayesian Network

We then proceed to fit a Bayesian Network to our processed data. .fit_node_states(...) acts like a dictionary / schema, saving the possible states of the network. Then, .fit_cpds(...) computes conditional probabilities. Now we transformed our structure into a generative model that can answer probabilistic queries.

The first thing we do is to run our test set thorugh the net and see if it can recover the true states of the target variable. This is actually a multi-class classification problem as we discretized our variables, so we use the micro-average ROC AUC.

This is actually a high AUC! The network did a good job computing the conditional probability distributions of the data. For instance, we can check that the probability of taking medication remains constant after conditioning on severity and sex, which is expected as we’re using df_rnd. That kind of interpretability is clearly a feature.

As the network can act as a generative model, we can compute probabilistic queries on it. Furthermore, being a structural causal model, the net can also perform do-calulus $P(y \vert do(X))$ and compute counterfactuals. Specifically, we’re interested in

We start by using the InferenceEngine class, which exposes the .do_intervention(...) method, allowing us to perform do calculus. The following function returns the distribution of recovery given no treatment (0) and treatment (1). It is fairly easy and elegant to use and a good feature to have.

We can plot the distribution to check how the medication impacts recovery:

We can clearly see that the distribution of recovery times for medication = yes is fairly skewed to the left as compared to medication = no, which shows an opposite pattern, indicating that medication provides an improvement.

Then, we compute the effects by calculating the expected recovery value given treatment and no treatment. This is easy as we’re assured that recovery labels reflect expected values at each bin.

And we’re off to a reasonable start! The net recovered an effect of 0.3975 or -0.92 in log space, which is close to the expected 0.368 and -1 true values. The ease of use and the fact that the net recovered the true effect counts as a feature.

However, there’s an important shortcoming: the net does not provide confidence intervals. A Boostrap procedure could solve this, but it comes with the additional caveat of repeating the computationally expensive processes of training and executing do-calculus for several nets.

Let us now try to solve df_obs, which has a high degree of confounding. For simplicity, let us abstract all steps into the run_full_bayes_net_test function:

Now we can run our test with any dataframe, structure and number of bins. Let us check out what happens if we run the net just like before but using the confounded df_obs dataset:

Actually, in this case, confounding damaged the counterfactual estimate of the network, which underestimated the effect by a large margin (0.7656 vs. 0.368/ -0.27 vs. -1.0), despite still getting the direction right (medication improves recovery). What did go wrong? I actually expected that the Bayesian Network would perform well on the confounded case, and would count this as a major shortcoming.

Let us move to test how different hyperparmeters impact the performance of the Bayesian Network. Particularly, we’ll examime n_bins and structure, for both confounded and unconfouded datasets.

Impact of hyperparameters and confounding 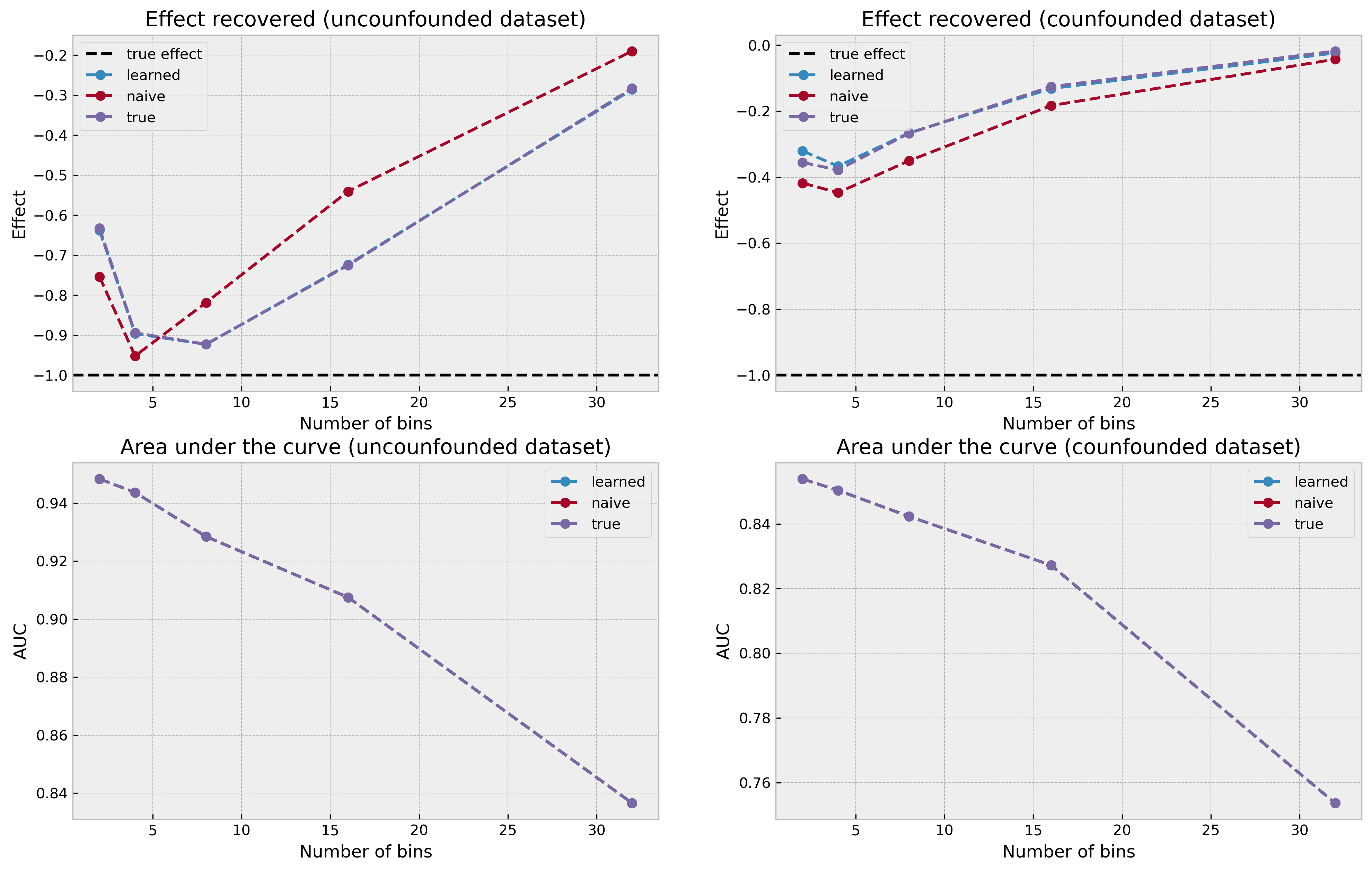 The plots show a interesting pattern. The true effect is shown by the black dashed line at y = -1.0. In the uncounfounded case, our counterfactual estimation procedure got really close to the true effect using an intermediate number of bins (4 and 8). The best structure was surprisingly the naive structure, although not by a large margin. The learned structure and the true structure arrived at almost identical results, which is also puzzling.

However, we see another major shortcoming of Bayesian Networks (at least in this setting): if the number of bins is too high or too low, we greatly underestimate the treatment effect. In a real-world setting, where we would not know the true effect, tuning this parameter would be challenging. Moreover, I would find very hard to trust the treatment effect estimate knowing of this sensibility to hyperparameters.

In the confounded case we observe the same pattern as we did before, with our Bayesian Network approach underestimating the effect across the board, independently of structure or discretization choice.

AUC results are the same independent of structure, which is puzzling as well (maybe there’s a bug on my code?).

Let us now summarize all that we’ve learned and list the main features and shortcomings of Bayesian Networks.

In this post, we took CausalNex for a spin, with the goal to test a promising method for causal inference, Bayesian Networks. We used a synthetic causal inference dataset to allow us to compare the model results to ground truth in an objective way. From this exploration we could check the main features and shortcomings of the approach. I list them below.

And that’s it! I hope it was a good read. All feedbacks are highly appreciated!