Let us explore an alternate case of the Multi-Armed Bandit problem where we have reward distributions with different risks. I’ll draw inspiration from Galichet et. al’s (2013) work and implement the MaRaB algorithm and compare it to Thompson Sampling and Bayesian UCB.

Let us borrow the problem from our previous post but change it up a bit by building a bandit problem where reward distributions have different variances. Each bandit $k$ is modeled as a random variable $Y_k \sim \mathcal{N}(\mu_k, \sigma_k^2)$, as in my last post, but with the following twists:

We can create an instance of our game just like in the previous post, only adding an alpha variable to guide CVaR calculation:

I parameterized the game such that bandits with highest expected rewards also have higher risk. Thus, the optimal bandit will change with our risk appetite parameter $\alpha$. Let us check our reward distributions highlighting their $\alpha$-quantile and their CVaR value: 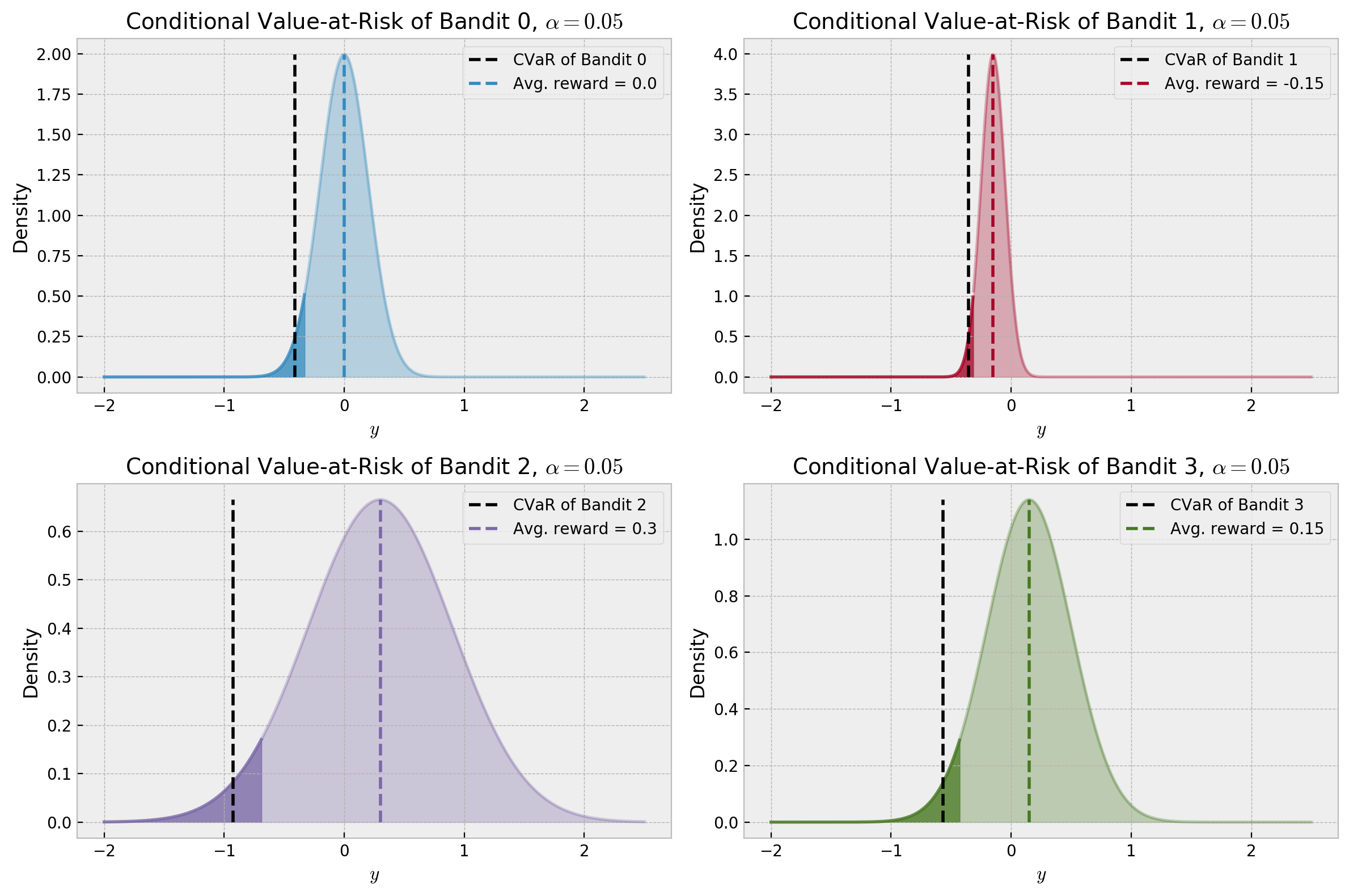 For the conservative value of $\alpha = 0.05$, the optimal bandit is actually the one with lowest expected reward. How would CVaR values change with $\alpha$, for each bandit? Let us check in the plot below: 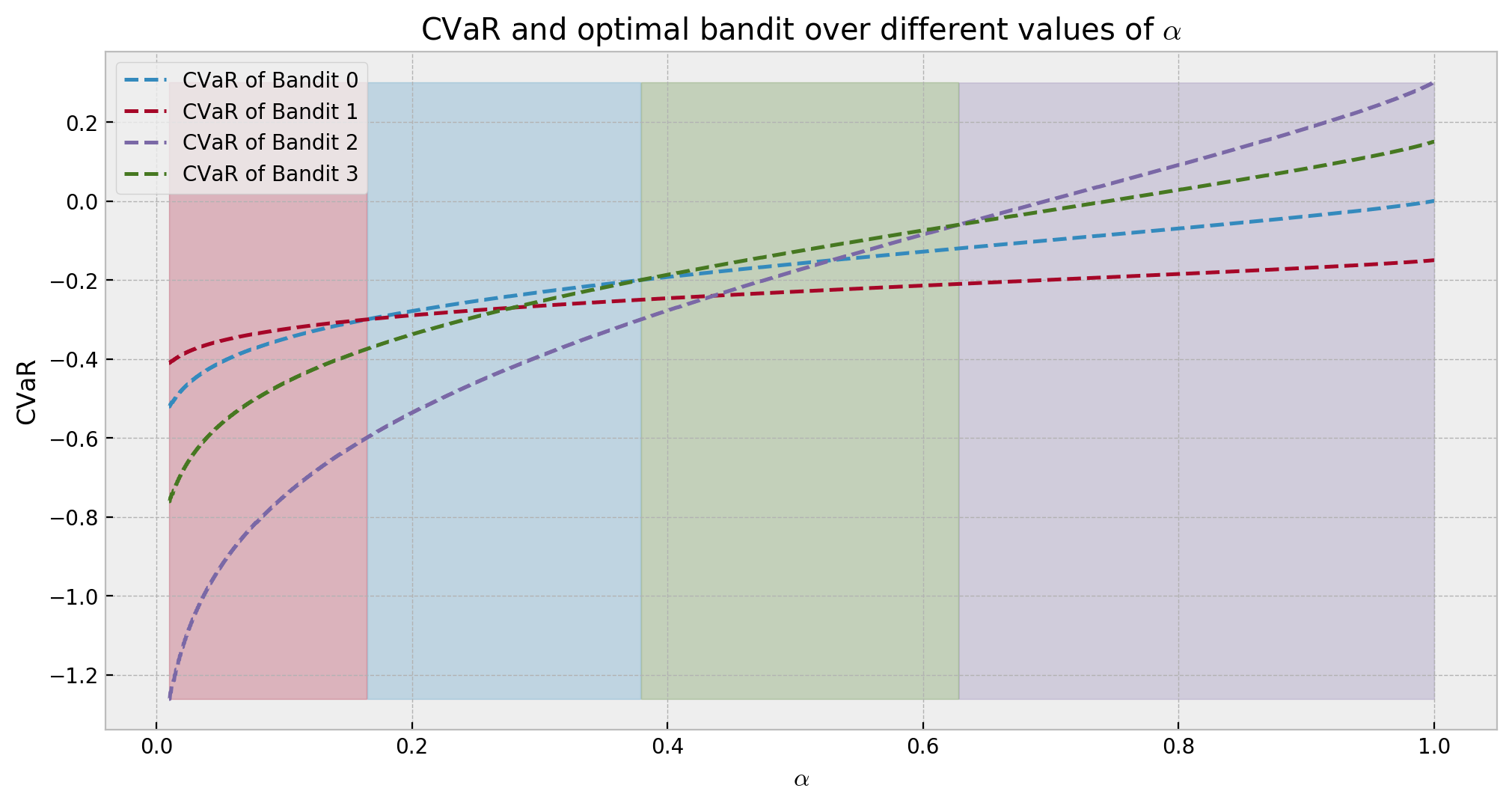 The shaded areas indicate which bandit is optimal at each risk appetite. As our risk increases with expected rewards, we see that the bandits with higher $\mu_k$ turn optimal in more aggressive scenarios. Also, we observe that the optimal CVaR is less than zero up until a certain $\alpha$ around 0.65. In a real application, if we had such conservative risk appetite, it would be better to take no action.

The Multi-Armed Risk-Aware Bandit (MaRaB) algorithm was introduced by Galichet et. al’s in their 2013 paper “Exploration vs Exploitation vs Safety: Risk-Aware Multi-Armed Bandits”. It selects bandits according to the following formula:

The quantity $\widehat{\textrm{CVaR} _k(\alpha)}$ is the average of the empirical $\alpha$-quantile given observations at time $t$, $\sqrt{\frac{log(t\alpha)}{n _{i,t,\alpha}}}$ is a lower confidence bound on the CVaR, $n _{k,t,\alpha}$ is the number of observations (rounded to ceiling integer) in the $\alpha$-quantile for bandit $k$ at time $t$, and $C$ is a parameter controlling exploration.

We can see that this algorithm is very conservative: it features a negative exploration term, which disencourages exploration, such that if two bandits have the same estimated CVaR, it will favor the one which has been selected more often in the past. However, while the $\alpha$-quantile contains only one sample, it will explore a bit as the CVaR will be a monotonically decreasing function with respect to the number of plays, making bandits that were selected few times look better. The implementation follows:

Let us observe it playing for 200 rounds with the following animation of rewards over time. In the animation, each horizontal line represents one of our four bandits and rewards are represented by dots with size proportional to the reward. We use $\alpha = 0.50$, so the green bandit should be optimal.

We can see in practice the risk-averse behavior of MaRaB, exploring very little. This lack of exploration may be a problem, making it harder to the algorithm converge to the best bandit.

Let us now experiment with two bayesian algorithms of increasing popularity, and compare them to MaRaB: Bayesian UCB and Thompson Sampling.

Bayesian algorithms for reinforcement learning are attracting much interest recently, due to their great empirical performance and simplicity. I bring two strong contestants for this post: Bayesian Upper Confidence Bound, for which we draw inspiration from Kaufmann et. al, 2012, and Thompson Sampling, which has been thoroughly studied by Van Roy et. al, 2018.

Both algorithms depend on calculating the posterior distribution for the quantity of interest, which in our case is the Conditional Value-at-Risk for a given risk appetite $\alpha$. In my last post I explore approximate inference techniques that could solve this problem. In this case, Bootstrapping seems like a good alternative, as it offers flexibility to compute the potentially complicated CVaR posterior. Therefore, let us start by implementing it.

Approximating the CVaR posterior with Bootstrapping

The code below is borrowed from my last post. It basically returns bootstrap samples of the data. We avoid uncertainty underestimation in early rounds by setting min_obs such that we only start taking bootstrap samples after we have min_obs observations. If we have less than min_obs observations we take samples of the prior distribution. This heuristic avoids greedy behavior in early rounds of the game, as bootstrapping has low variance with few observations.

Bootstrapping has a harder time estimating CVaR than estimating the expected reward of the Gaussian distribution like in the previous post, especially for lower $\alpha$ values. However, it eventually concentrates around the true values, giving what it seems like reasonable uncertainty estimates. For $\alpha = 0.10$, we can see big changes in the approximate posterior every 10 new observations, as we can add one new sample to the $\alpha$-quantile. Also, we see big changes when a new minimum is observed, pushing the approximate posterior to the left. For $\alpha = 0.50$, the $\alpha$-quantile includes half of the observations, so the posterior improves more quickly. For $\alpha = 0.90$, the posterior is close to the mean of the distribution. The first frame shows the prior distribution along with no observations.

Now that we’ve got posterior inference covered, we can start implementing our bandit algorithms.

Bayesian UCB, introduced by Kaufmann et. al, 2012, is an improvement on UCB1 that uses the quantiles of the posterior distribution to make decisions. It uses the following decision rule:

where $Q(q, \mathcal{D})$ is the quantile function for quantile $q$ and distribution $\mathcal{D}$, $t$ is the current round, $n$ is the time horizon (total number of rounds), $c$ is a hyperparameter controlling exploration in finite-time horizons and $\lambda_k^{t-1}$ is the posterior of our quantity of interest for bandit $k$.

The algorithm is essentially computing a dynamic quantile over the posterior distribution that gets more optimistic as time passes. In our case, we’ll apply this rule to the approximate CVaR posterior. The Python implementation follows:

Let us now see how the algorithm makes decisions in the animated 200-round game.

The algorithm explores more than MaRaB, for two reasons: (a) we sample from the prior for boots_min_obs rounds, forcing exploration until bootstrapping can reasonably approximate the CVaR posterior, and (b) contrary to MaRaB, exploration can be performed even in later steps of the game.

Let us continue to the last contender: Thompson Sampling.

Thompson Samping, which is thoroughly studied in Van Roy et. al, 2018, is a very simple decision heuristic to solve the exploration-exploitation dilemma. The idea behind Thompson Sampling is the so-called probability matching. At each round, we want to make our decision with probability equal to the probability of it being optimal. We can achieve this as following:

As we’re approximating the posterior with bootstrapping, sampling from the posterior is the same as taking a single bootstrap sample. Thus, we can implement Thompson Sampling very efficiently:

Let us also inspect TS decision-making in the 200-round game:

With Thompson Sampling, we also explore much more than with MaRaB. However, we can see that exploration is more balanced: TS gradually rules out sub-optimal arms, while Bayesian UCB seems to “switch-off” sub-optimal arms for longer periods of time before drawing from them again.

Cool! We now have all the algorithms, and can compare them over more simulations.

Let us now compare the algorithms over many simulations. Let us analyze cumualtive regrets, rewards over time and risks, for different values of $\alpha$.

MaRaB shows linear regret curves for most plots, as it missed the optimal bandit and got stuck in a suboptimal choice in many simulations. For $\alpha = 0.05$, it converges very rapidly to a reasonable solution, with average cumulative regret being stable after 1000 rounds. I would bet on two things to explain this result: (a) the optimal bandit for this $\alpha$ is the one that should give the best minimum reward most of the times, so the risk-averse nature of MaRaB is well suited in this case; and (b) we have to wait 20 rounds for the $\alpha$-quantile of each bandit to be larger than one sample, where CVaR is monotonically decreasing w.r.t number of plays, encouraging exploration. Therefore, MaRaB explores much more for $\alpha = 0.05$ than in other experiments, which helps it always find the optimal bandit.

Overall, the best algorithm seems to be Thompson Sampling, as it beat Bayesian UCB in 5 of 6 cases and MaRaB in 4 of 6 cases, with a minor difference in regret for $\alpha = 0.25$. 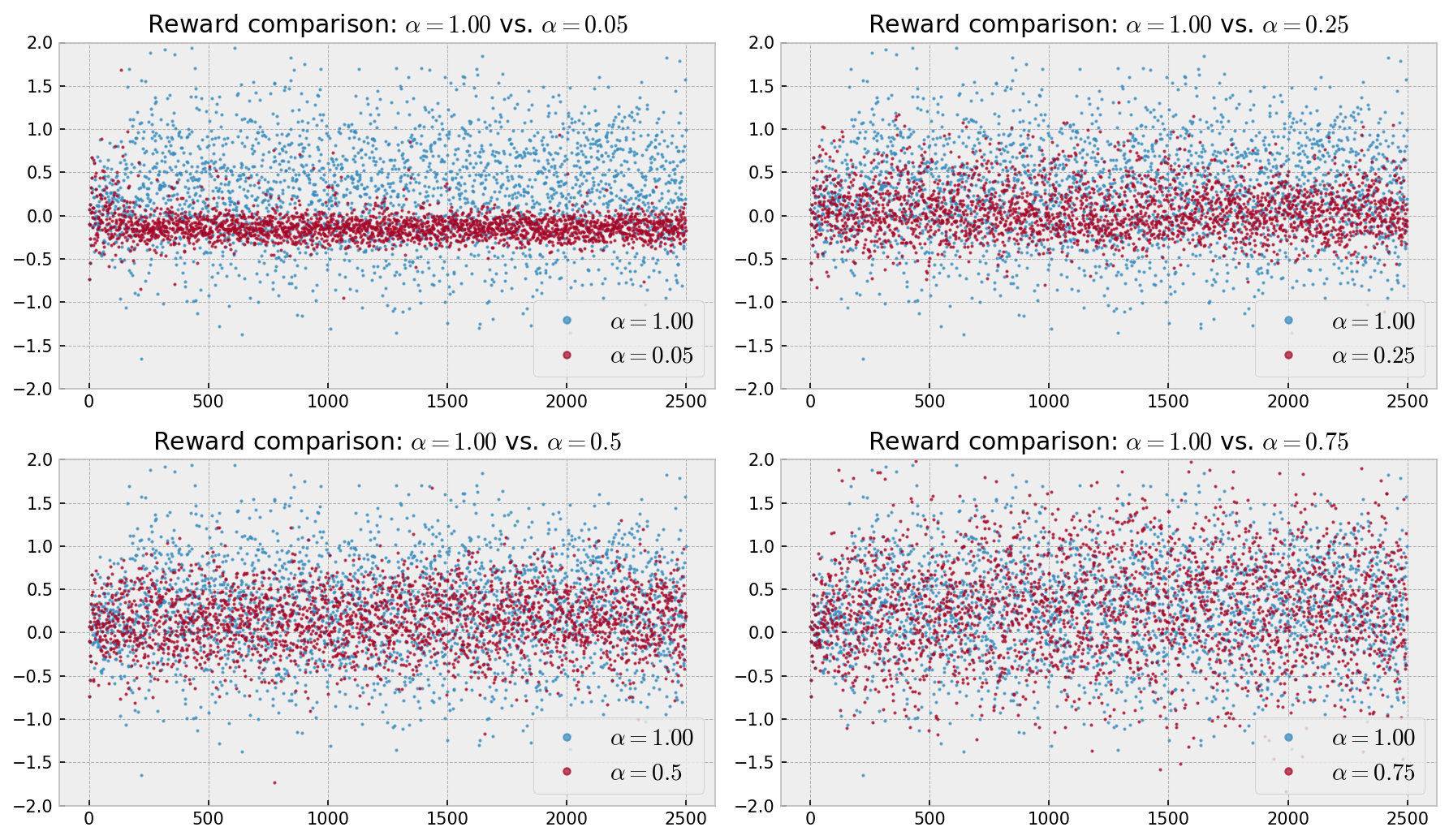 In this tutorial, we added a little bit of complexity to the classical multi-armed bandit problem with gaussian rewards by including a risk-averse incentive to the player. We measured the player’s regret using Conditional Value-at-Risk $\textrm{CVaR}_{k}(\alpha)$, which is the average reward of the worst $\alpha \times 100\%$ outcomes the reward distribution can have. To make things more interesting, we defined problem such that the bandits with higher rewards also had higher risks, setting up a risk-reward compromise.

As usual, full code is available on my GitHub. Hope you enjoyed the tutorial!